Before I began birding . . . my visits to Texas were on business: Houston, Dallas and as an occasional layover at an airport. When I thought about Texas it was Roger Staubach; Tim Duncan and Nolan Ryan or in the political vein Bush ’41, Bush ’43 and Ted Cruz.

Then my wife got me into birding, and I was surprised to learn that Texas sits at confluence of two migratory flyways and thus no state matches Texas for its diversity of birding.

In April of 2017, Ingrid and I spent a week in and around High Island (80 miles north of Houston) and the Bolivar Peninsula and were delighted by variety of species, the beaches, the wetlands and the birding locations.

Since High Island we have been reading about the Lower Rio Grande Valley, the southern tip of Texas on the Gulf side.  Being 300 miles south of Houston, an entirely new mixture of species are found, influenced by the Rio Grande, its canals and tributaries . . . it’s an entirely new birding experience.  So, with our winter birding options limited by school vacations (Ingrid is a 4thgrade teacher), we decided to head for Texas again.

We enjoyed a beautiful Maine Christmas morning with our grown children and their significant others; had the Christmas tree down by noon and by 4:00 we were heading for Boston and our flight to Brownsville, Texas.

We arrived at the Inn at Chacalaca Bend in Los Fresno, a bed and breakfast that caters to birders.  Located at a gentle curve in the La Resaca de las Antonias River, the Inn is surrounded by 27 acres of palms and wild olive trees and hiking trails.  The Inn keeps multiple feeding stations stocked with seed and fruit as well an elegant bird blind complete with a ceiling fan.

Unfortunately, we arrived on the afternoon December 26 to 40-mile per hour winds and thus the Inn was not exactly bird friendly.  We managed to see three of our target birds (Couch’s Flycatcher, Tropical Flycatcher and the Great Kiskadee) . . . beautiful species, but hardly what we had hoped for.  We gave up after a few hours and began to explore the Inn.

Dozens of field guides, bird posters and sculptures decorate the common rooms.  The various guest rooms are named: the Great Kiskadee, Ruby-throated Hummingbird, Buff-bellied Hummingbird, Green Jay, Altamira Oriole and our room “the Belted Kingfisher”.  Each unit is decorated with bird art of its namesake and a beautiful painted tile over the sink in the bathroom.

As we retired for the night, disappointed by the windy conditions . . . our entire itinerary was thrown into flux when Ingrid read that the National Wildlife Refuges were closed due to the government shutdown.   Thus, we decided to concentrate on the World Birding Centers, a series of affiliated State Parks embracing eco-tourism.

We awoke to diminished winds and the birds we were expecting at the Inn at Chacalaca Bend were back.  Ingrid immediately saw our first Green Jay . . .  a large greenish yellow bird with an exquisite Blue/Black head. It would not be our last Green Jay (lol).

After breakfast by one of the Inn’s bird feeders, we headed an hour west to McAllen and Quinta Mazatlan, a 1930’s historic Spanish Revival adobe hacienda surrounded by lush tropical landscaping and native woodland.  Birds were everywhere and virtually every bird was a lifer.

In the middle of the park was a feeding station we sat at for at least an hour, and the birds came to us . . . including the comical Plain Chacalaca.

Our next World Birding Center stop was the Old Hidalgo Pumphouse, and frankly it was a disappointment.  At the preserve based around enormous pumps that were once used to bring water from the Rio Grande we saw lots of Great Kiskadees but little else . . . but on the way back to the car . . . Ingrid spotted at Ringed Kingfisher. What a thrill that was, twice as big as our Belted Kingfisher and beautifully colored. We watched him for 10 minutes before I spooked him by trying to get even closer.

At this point it was about 4:00 and we decided to make a mad dash for Oliveira Park in Brownsville to see the parrots.

Every night hundreds of parrots (mostly Red-crowned with a few other species mixed in) congregate around the Little League, Skateboard and Soccer fields. They squawk and preen and fly in intricate loops before descending into the eucalyptus trees for the night.  In the morning, they disperse across the country side.

We arrived early and feared we were in the wrong spot.  Then there rose such a clatter (see what I did there) we rushed across the park to watch the parrots congregate over a residential house at the corner of the park. For 20 minutes, we watched and photographed and chatted with other birders.  Then the parrots circled the eucalyptuses, often glowing in the sports field lighting before settling into their nightly roosts.  The locals rarely looked up . . . lol.

We headed to the Gulf Coast and a boat trip around the inland bay formed by South Padres Island and the mainland.  I had booked what I thought would be a private birding trip (it wasn’t) with Fins 2 Feathersfrom Port Isabel Island.  While the trip was fun and we saw lots of birds, Captain Paul was another story:  he misidentified birds, incessantly performed loud baby talk to passing dolphins, filled us in on his money problems and the ex-girlfriend who left and took their dog . . . not to mention plowing into the wake of a passing boat, thus soaking my camera gear.

The highlight of the voyage (other than saying goodbye to Captain Paul) was seeing a coyote on a sandbar tearing apart a White Pelican that it had killed. Nature can be gruesome as well as beautiful.

Once on shore we headed to South Padre Island, a resort beach community with lots of restaurants and condominiums.  We had a wonderful lunch on an outdoor beach café and got some up close photos of Great-tailed Grackles that were stealing french-fries from diners’ plates.

We then went to South Padre Island Nature and Birding Center where we strolled a fabulous birding boardwalk and overlook tower.  We didn’t see any lifers but were within a few feet of such incredible birds as Northern Shovelers, Green Herons and Black Skimmers.

We then drove north on South Padre Island hoping to see some more birds, but were greeted with drifting sand dunes that were encroaching on the road.  Ingrid and I know how to drive on snow drifts . . . but sand drifts are a different story . . . so we called it a day and headed back to the Inn.

The previous two days had been in the 80s and 70s and I was rather uncomfortable in long pants . . . with the weather predicted to be in the high 60’s I decided to wear shorts.  As we drove west toward Estero Llano Grande Valley State Park and World Birding CenterI watched the dashboard thermometer drop and drop and drop.  By the time we arrived it was low 50’s and even a Mainer was uncomfortable with bare legs.

Estero Llano is an incredible birding locale, with a large patio bordering a gentle waterway, filled with every dabbling bird of the region.

An excellent guide walked us around the refuge, and we picked up 10 lifers including the adorable Least Grebe.  My favorite bird of the day was a one we saw last February in San Diego . . . the Vermilion Flycatcher.  This one hung around us for at least an hour.

Our final full day in Texas was spent at Brownsville’s Resaca de la Palma World Birding Center, 1200 semi-tropical acreswhere we saw an Altamira Oriole and something called a Rio Grande Turkey . . . subspecies of the Wild Turkeys that roam our back yard in Maine.

One of the neat things about Resaca de la Palma is a tram that takes visitors through the park.  With the temperature, down to 43 degrees, there was virtually no one in the park . . . so we had a private tour and the guide helped us look for the Green Kingfisher (we failed).

Our final bird of the day and the year was the Olive Sparrow, a bird we looked for all week.  It ended up being our 341st ABA bird of the year and our 417th ABA life bird. 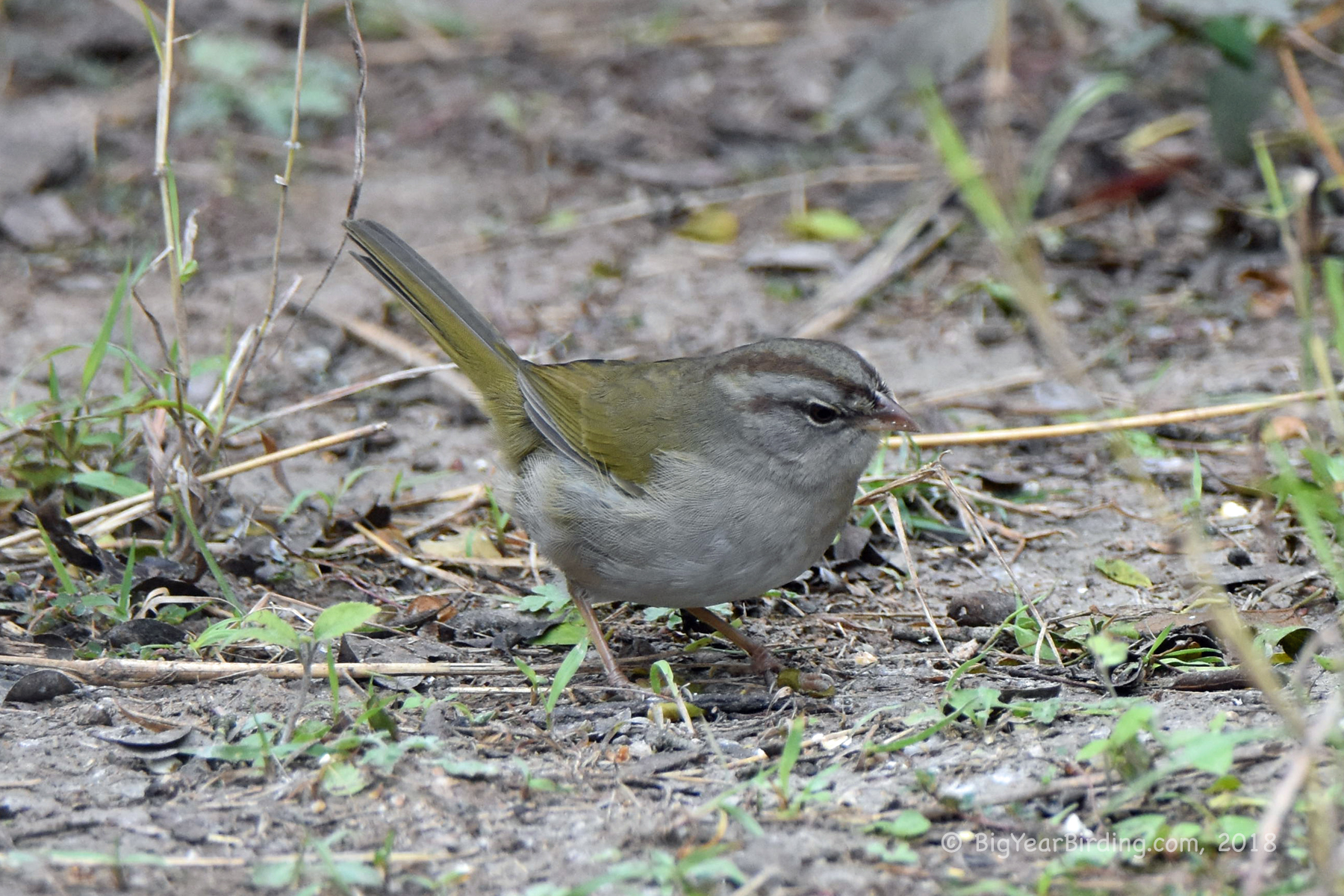 We searched in vain for the rare Aplomado falcon, scanning the closed Laguna Atascosa NFW . . . but no luck.

The trip home was brutal as United Airlines snuck in a second connection after we booked the flight last summer.   How is it the same flight number when you have a stop in Newark, a four hour layover, a different plane and a different model?

To the best of our recollection, Ingrid and I did not see a bird (any species) all day long.

Our trip to the Lower Rio Grande Valley was wonderful.