This afternoon I drove over to my bank in Bath, Maine and did some quick business . . . “quick” was the operative word and that gave me time to drive down to the City’s sewage treatment plant for a little birding.

At first I saw the usual array of Ring-billed Gulls and Mergansers . . . and then I saw a brown headed duck with a short but bright orange bill swimming off by herself.  It looked like a Common Goldeneye but the bill looked wrong.  Excitedly I opened my trusty field guides and sure enough it was a female Barrow’s Goldeneye.  Ingrid and I had see male Barrow’s 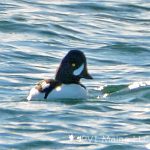 before  . . . once in 2015 and then again in 2017 . . . but never a female.  The male Barrows can be distinguished from a male Common by it’s white tear drop face spot (the Common Goldeneye has an oval spot). Female Barrows have a short oranger bill and a squarish head (as opposed to a longer brown bill and round head).