Our son Bradley lives in California which seems a long way off sometimes.  Next weekend he gets his MBA and to celebrate I decided to treat him to a weekend in Chicago and a Red Sox Game. 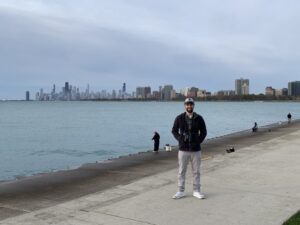 So Friday night I flew west from Portland, Maine and Bradley flew east from San Francisco . . . and our planes landed within minutes of each other.

Saturday morning, my poor son . . . suffereing from jet-lag, too many beers and a bad Boston Celtics loss was shaken away at 6:00 am by his bird obsessed father . . . “lets go birding”.

Montrose Point Bird Sanctuary is one of those special birding locations where geography drives migrating species into small easily accessible point.  Montrose sticks out into Lake Michigan surrounded by a huge American city.  Small trees, scrub, ponds and sandy beaches attract migrating birds by the thousands as they fatten up and rest before flying across the lake.

To be fair to Bradley we only stayed at Montrose for an hour but got 10 FOY birds including one first lifer (a Yellow-throated Vireo).

While our sure my son enjoyed the Red Sox’s 15-2 victory over the White Sox; the tour of Wrigley Field; walking around the city; the deep dish pizza; etc.  But he was amazed by the birds and the number of birders at Montrose.