I was in Puerto Rico part of this week on business . . . and as I grow older business travel is becoming just plain miserable. Once I learned of the trip, poor Ingrid (my wonderful and under appreciated wife) . . . in order to get me to shut up and quit whining suggested I extend the trip a day and go birding.

After clearing it with my boss, I began to look around for a guide. With only one day to take in as much as I could, a guide made sense. After bit of research it became clear that the best guide on the island was Gabriel Lugo. He was used by one of the birding tour companies, had impressive eBird posts and had incredible reviews on Trip Advisor.  I emailed him and he got right back to me with a reasonable price and a challenging target bird list.

While the “Birds of the West Indies (Princeton Field Guides)” seemed a little dated it was by far the most useful. 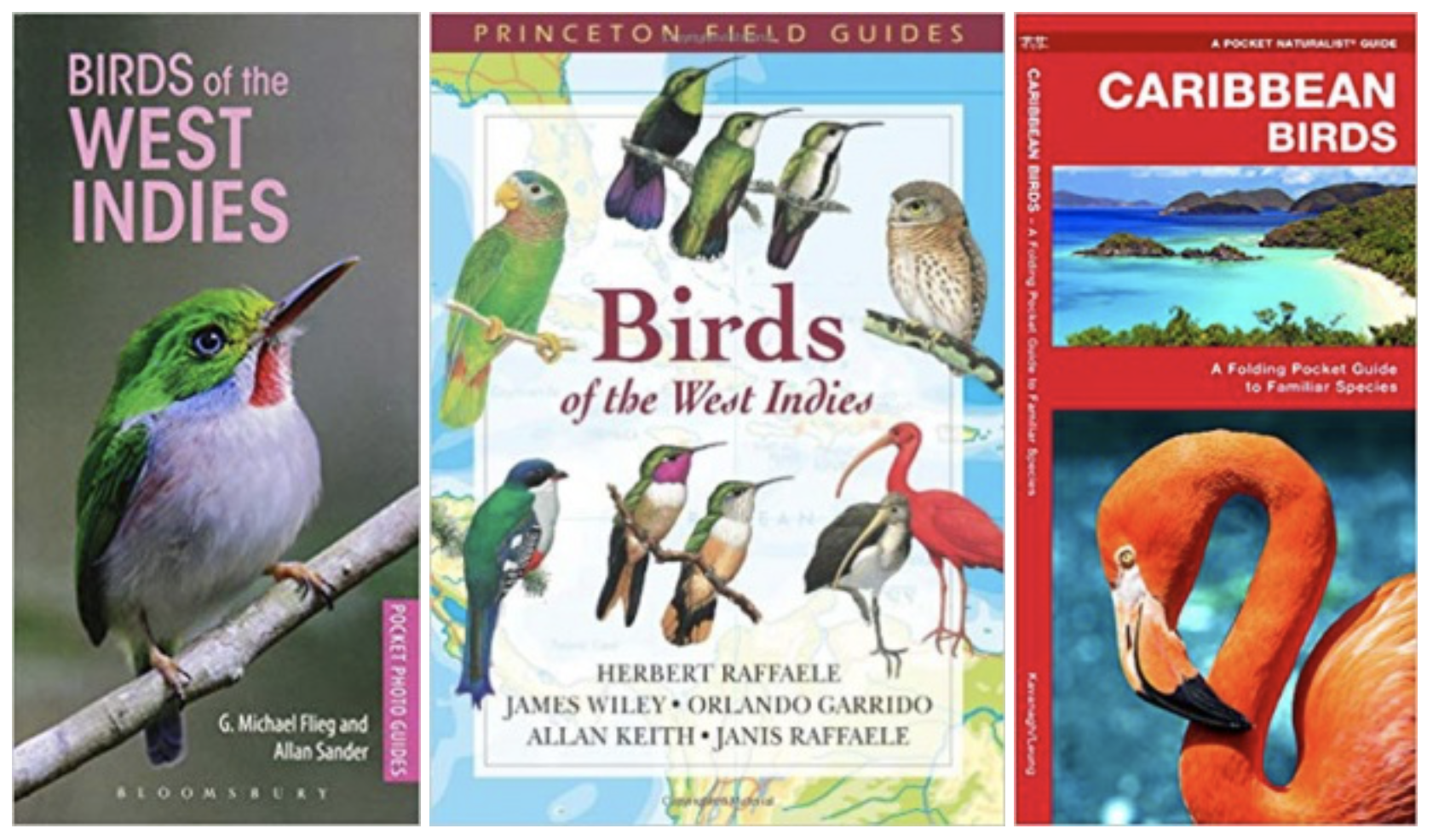 Gabriel picked me up at the hotel early and we were off to our first stop . . . about an hour out of San Juan we stopped on a side road near a mall and got a Puerto Rican Spindalis, Smooth-billed Ani (a bird I’ve been chasing or a couple years), a Monk Parakeet (not a lifer but my first life photo), and  the first Bananaquit of the day (we would see many, many more). 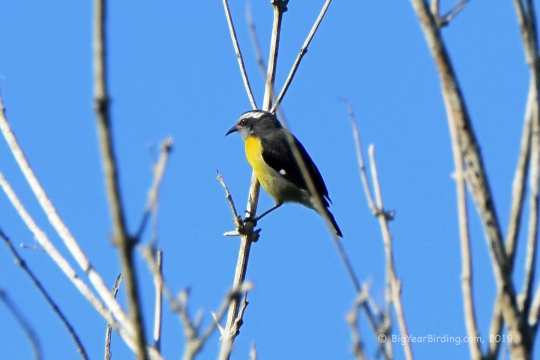 Next stop was one of Gabriel’s secrets spots and he made me swear not to disclose it . . . this was fine as I had no idea where I was.

Anyway, Stop 2 was a long steep hill, forested on both sides to the edge of the road.  Over the next couple hours we (mostly Gabriel) coaxed a number of Endemics into view.  These included a Puerto Rican Oriole, Puerto Rican Vireo and the target bird of the day . . . a Puerto Rican Tody.

Gabriel heard a Puerto Rican Lizard Cuckoo several times and made a couple audio call to perhaps get him to come into view.

Suddenly, a huge bird flew out of the wood and glided just over my guide’s head landing on a nearby tree just off the other side of the road.   The Cuckoo crept up a branch watching us.

Stop three was a little bit further up the hill where we picked up male and female Black-faced Grassquits . . .

Stop 4 was the end of a long dirt road with limestone cliffs on all sides leading down to a small farm.

Gabriel, like Captain Ahab was determined to hunt down a Puerto Rican Peewee and we spent a good hour (90 degrees) trying to find him. Not that I’m complaining as we both could hear a Peewee singing back at us . . . but it was a struggle to find. Finally, Gabriel found him high up in the trees and we watched him work his way down within camera range. 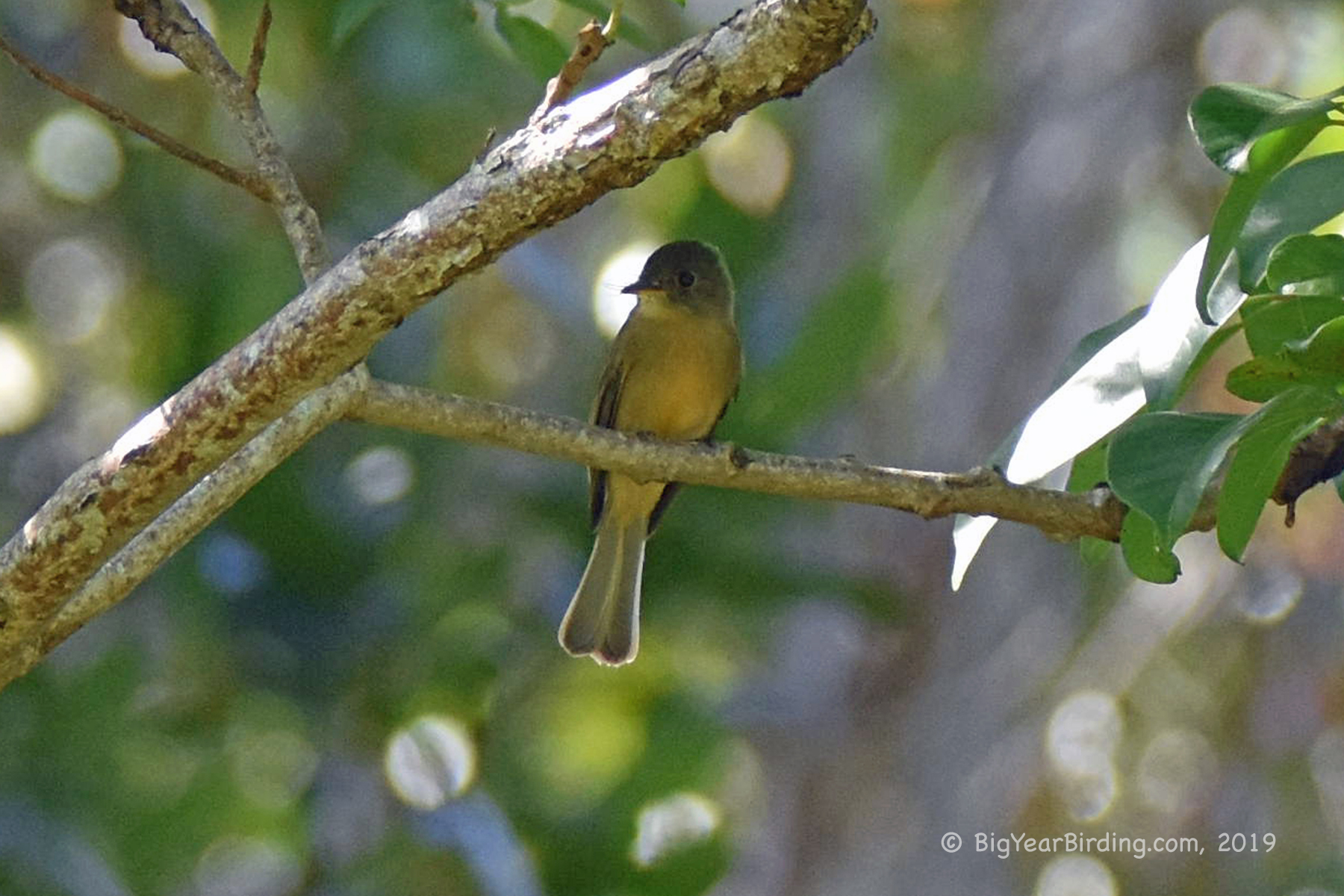 The rest of the day was birding from the car and short stops in the mountains.

These included Scaly-breasted Munia . . . a bird Ingrid and I had see briefly in California. 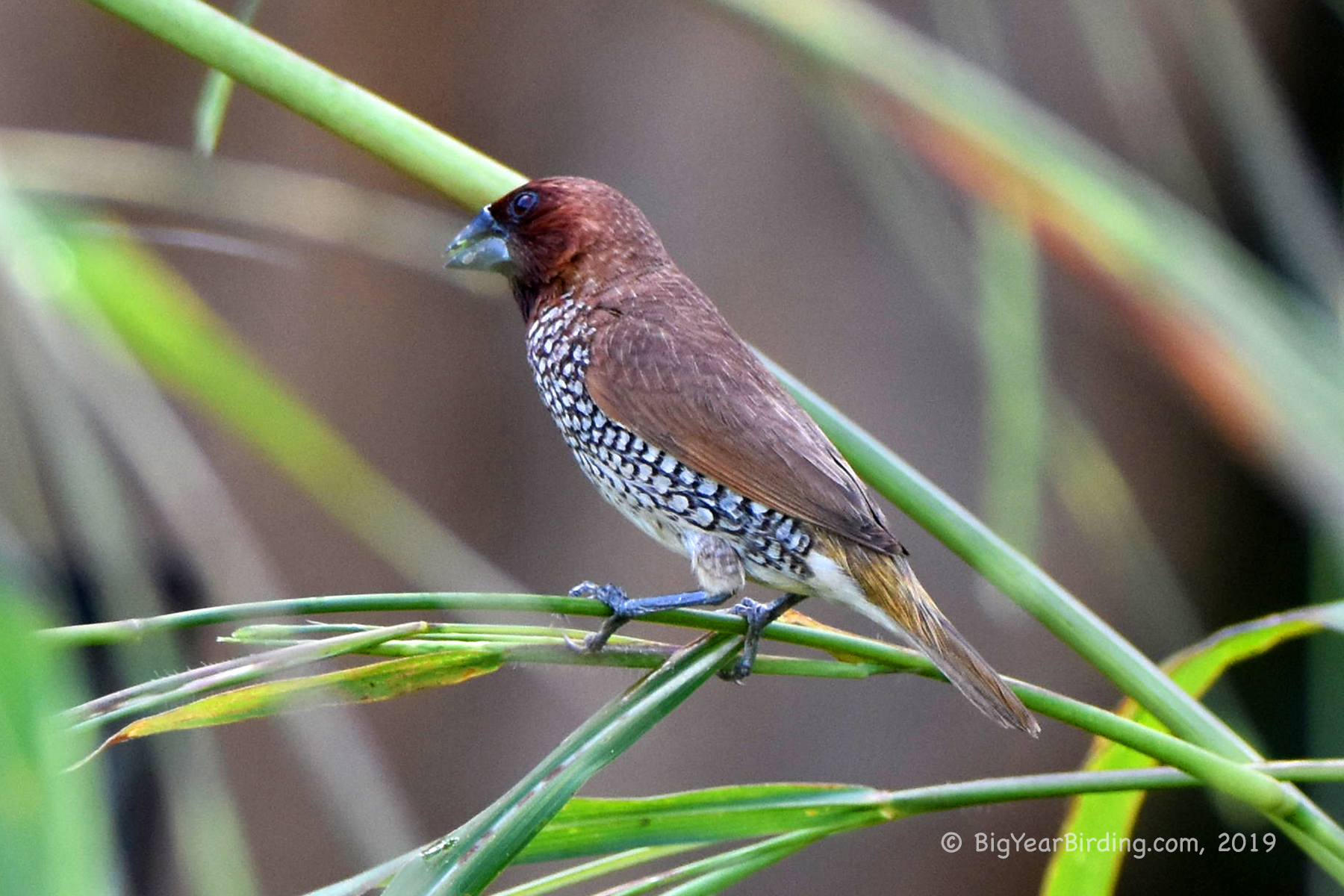 A West Indian Whistling-Duck and Common Gallinule standing on a cement barrier beside the road.

And a Green Mangro . . . an endemic Puerto Rico Hummingbird. 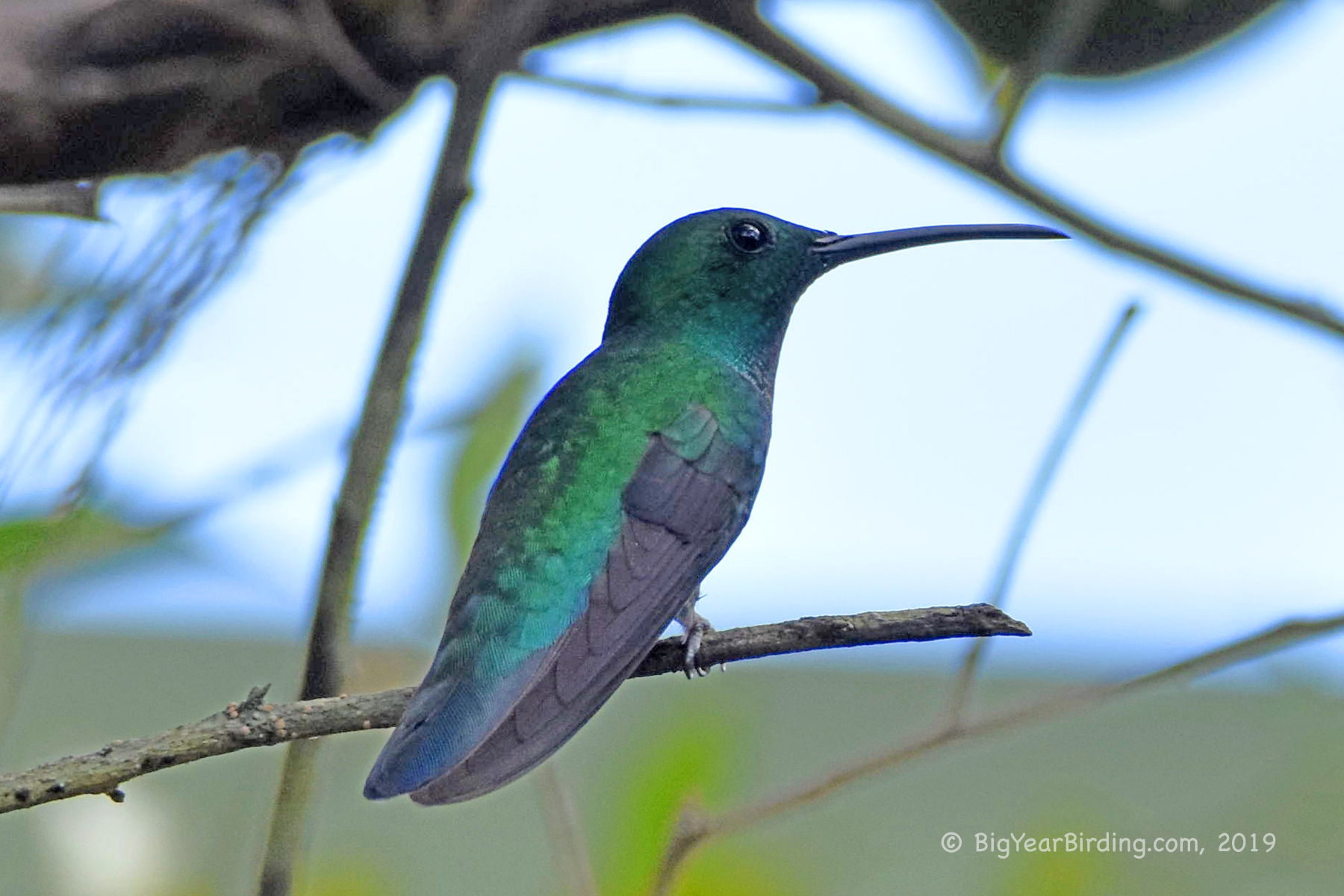 Other birds we saw in no particular order: 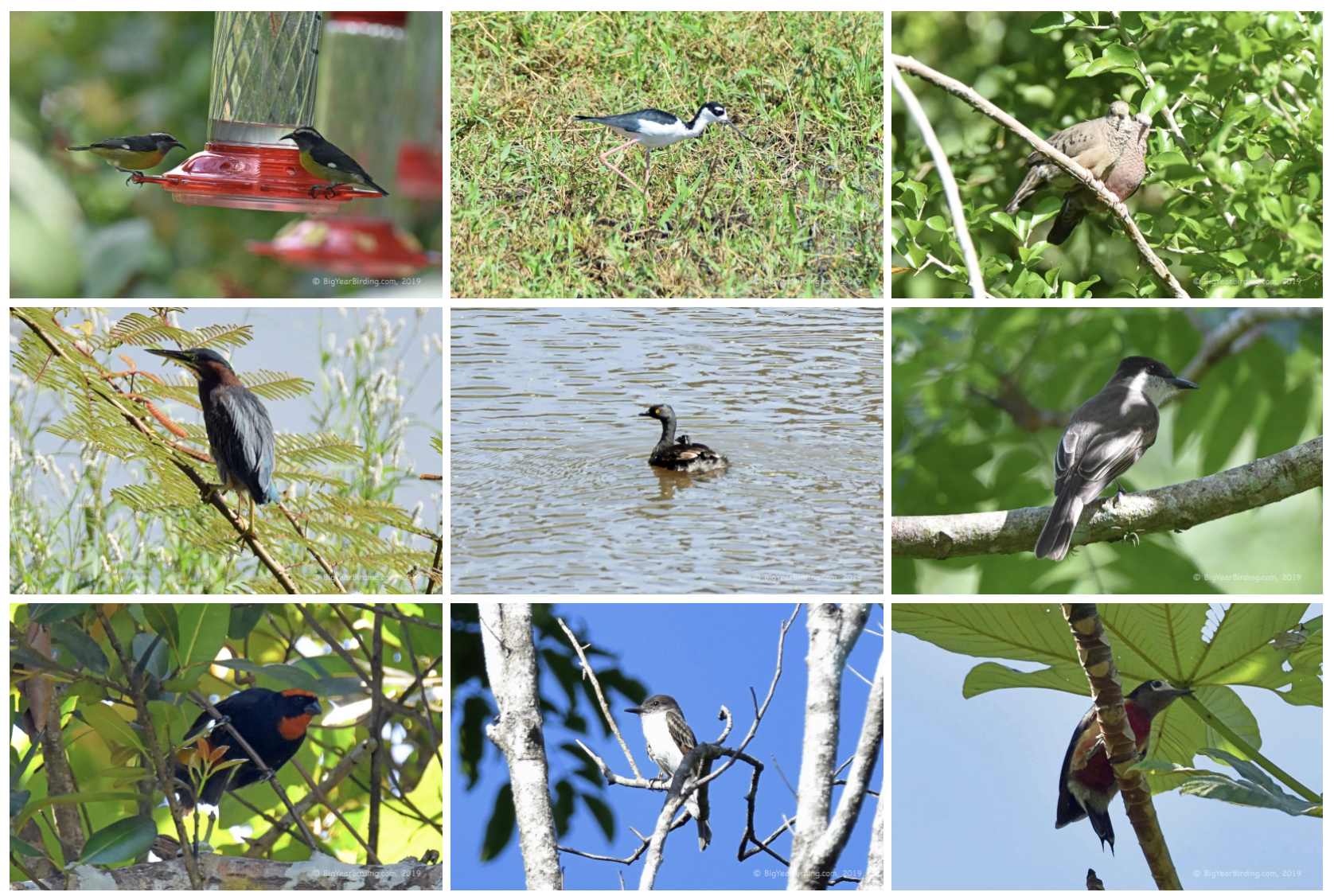 At the end of the day I was exhausted. It was a wonderful trip with an excellent guide . . . incredibly we only birded a small part of the Island. Look forward to doing the rest.