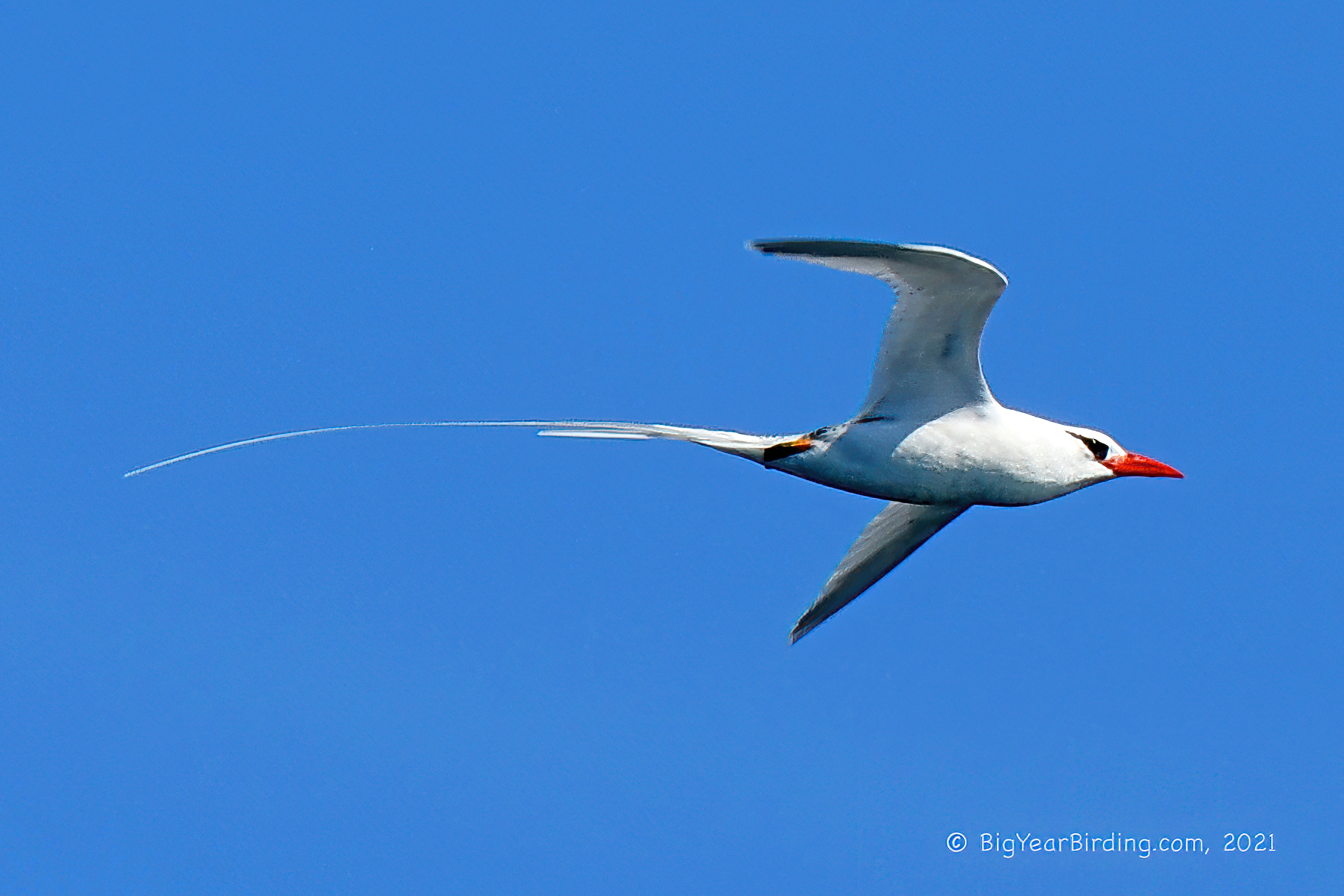 Last January I stood in the freezing cold for a cumulative 10 hours before a Black-headed Grosbeak showed up in a Portland park.

In May I drove five hours to Lubec (the eastern most point in the USA) and watched a feeder for 48 minutes before the Painted Bunting appeared.

And last month I took a Ferry from Rockland to the island town of Vinalhaven and then lobster boat further out to sea and waited three hours for the Red-billed Tropicbird . . .  THAT NEVER SHOWED UP!!!!!

You see, birds have those “wing things” and tend to fly places you don’t expect.  They can be shy and hide in burrows or brush piles. Or completely change their behavior from one day to the next.

Basically Birds can be a Pain in the Ass.

Now, back to the Red-billed Tropicbird.

Normally, this is a bird that breeds in the Caribbean. On the pacific side of the continent, they are seen occasionally  in the ocean between California and the Galapagos Islands.  Warm water mariners report them far out to sea.  Their northern most breeding location is in Puerto Rico.

Obviously a Red-billed Tropicbird does not belong in frigid Maine waters . . . but one particular bird . . . nicknamed “Troppi” . . . doesn’t know this.

Troppi was first seen off the Maine coast in 2005.  In 2006 he was seen again and again in 2007.  By 2008 it had taken up summer residence under a bolder on the Seal Island Wildlife Refuge . . . a mile long rocky outcrop.  He has since returned every summer, arriving in May and departing in August.

He is an enigma, as each summer he disappears for two to five days at a time . . . presumably to feed . . . but no one has actually seen him eat anything, nor has he ever been seen out at sea (by fishermen, naturalists or pleasure boaters).

No one knows where Troppi goes during the winter.  Presumably he travels to warm waters of the Caribbean (Red-billed Tropicbirds breed and nest during the winter), but there is no evidence of this.

Troppi is definitely a male, as he has been seen trying to get frisky with a Tropicbird decoy . . . and a lobster buoy (I know, I know, some images you just can’t un-remember).

Trips to Seal Island are difficult and when you get there . . . you wait and hope Troppi appeared.  Yesterday was my third trip out there, the first two had ended in the “agony of defeat” (queue to ski-jumper).

Yesterday’s trip was a charter of serious birders trying to see the celebrity bird.  The organizer, Derek Lovich  of Freeport Wild Bird Supply, had taken a group out on June 26 and failed to see the bird (this was unusual as he has a pretty good track record of seeing Troppi).

Upon arriving, we took in the expected array of nesting birds (Atlantic Puffins, Razorbills, Arctic and Common Terns) but no Tropicbird.  It was a hot, sunny and still day and slowly over the next 90 minutes, the birders became quieter and quieter . . . more and more concerned.  Half the group was scanning the horizon with binoculars, the rest were staring blankly at the island.

The bald guy sitting near the stern was seeing his Maine Big Year go up in flames . . . Troppi was essential to get to 318. But Ingrid remained optimistic as the afternoon wore on.

The trip organizer was trying to calm the restless natives with stories about the Tropicbird . . . concentrating on his propensity to mount lobster buoys when someone on the starboard side yelled “there he is!!!”.

Flying right toward our boat was a large white bird with a bright red bill, black mask and long white streamers coming off his tail. He flew low, right over us and birders screamed in delight: “WOW”, “Oh My God”, “Unbelievable”. 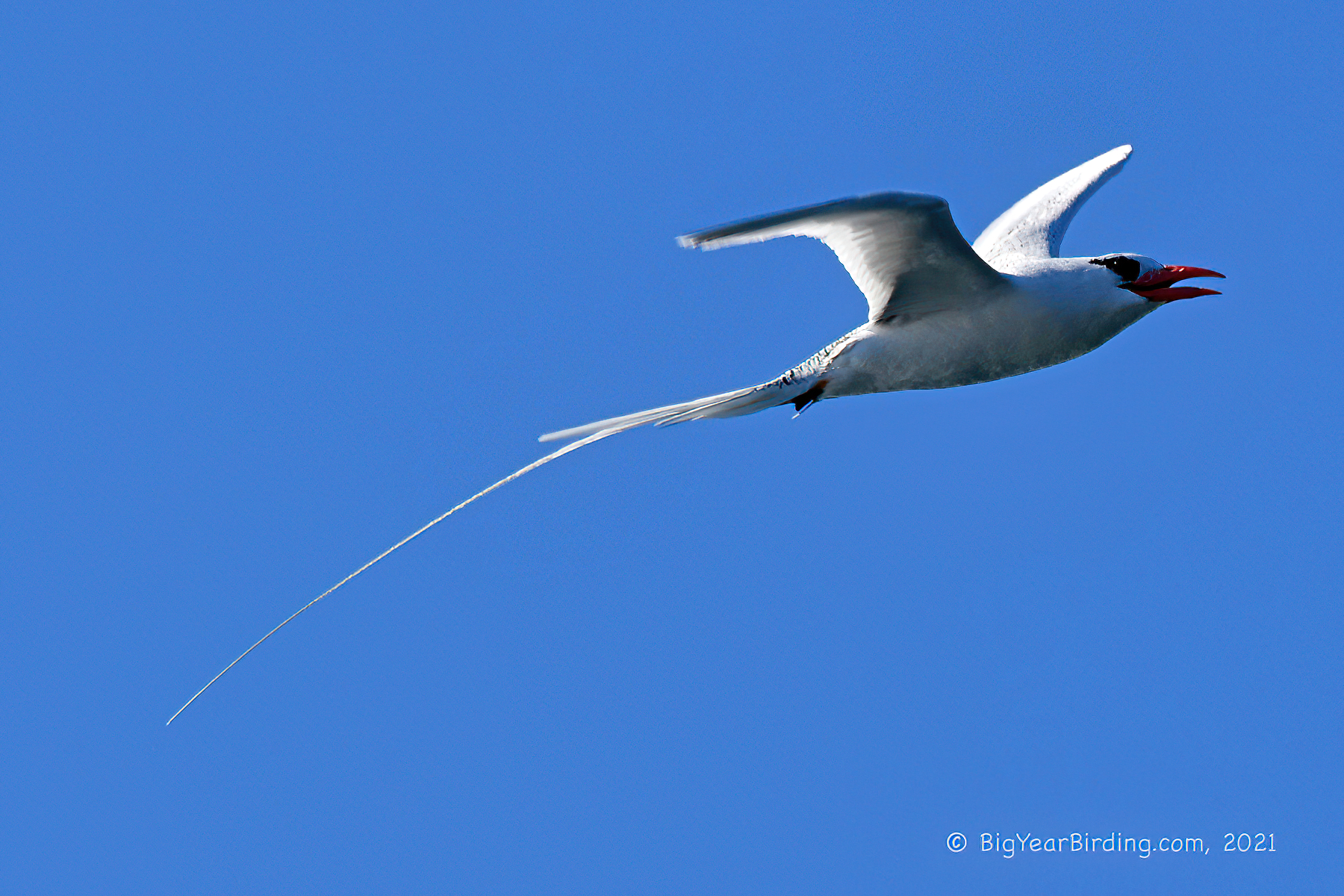 Many of us had made multiple attempts to see Troppi and the boat was delirious with high-fives, fist bumps and hugs.

Troppi made a loop around the island, and made another pass over the boat, this time letting out an amazing cackling display call (apparently he was trying to impress the terns).

Another trip around the island and another boat pass took place before he landed in the water and proceeded to take a bath. 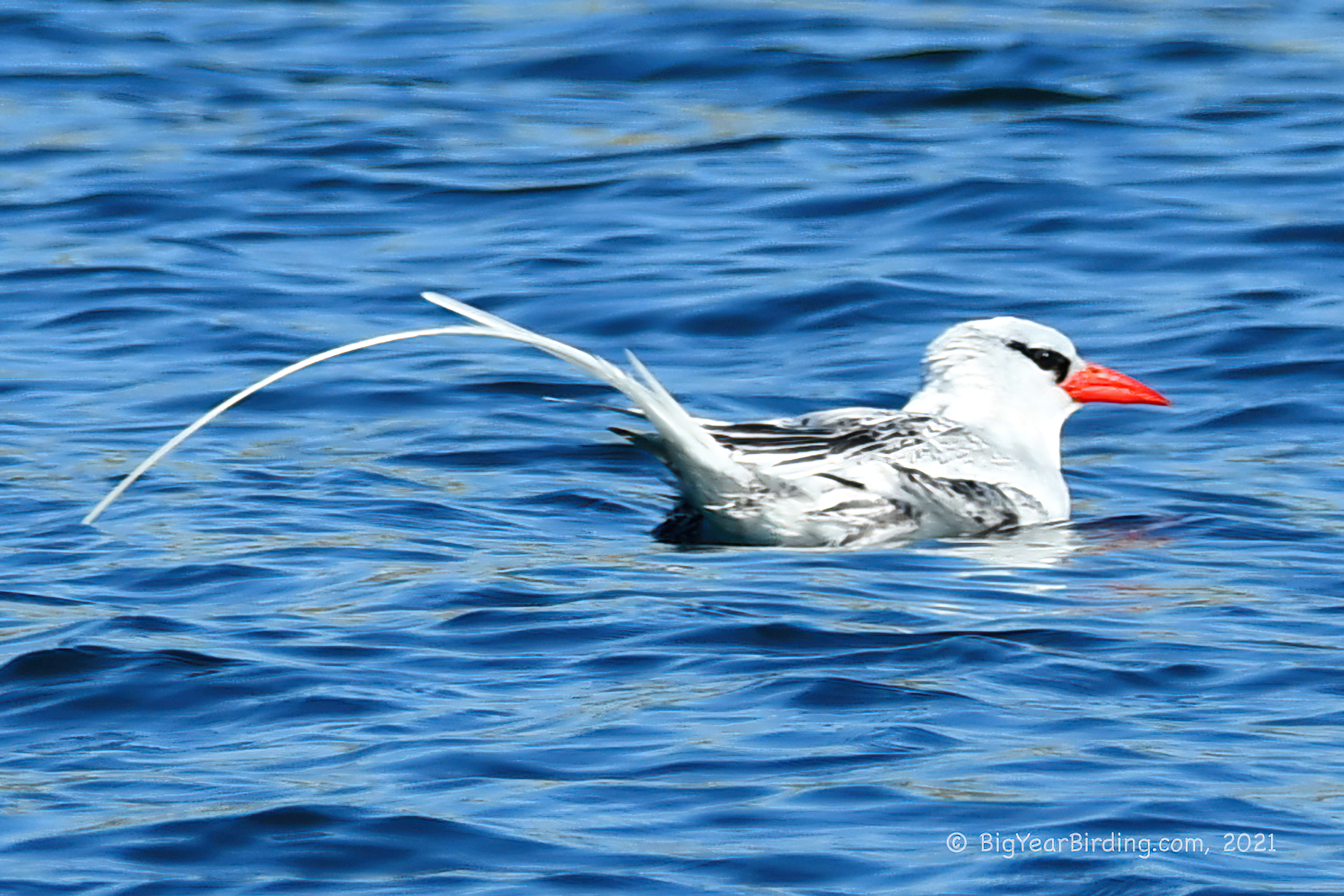 No one knows how old Maine’s famous bird is, but Red-billed Tropicbirds are believed to live up to 30 years.  We know he must be at least 18 years old . . . so we may have another decade of his amazing visits.  But life in the wild is unpredictable.

So glad to have finally seen him.  Maine Big Year Bird #287.