Yesterday, Ingrid and I visited Katahdin Woods and Waters . . . 87,000 acres of forestland in Northern Maine.  In 2016, President Obama made it a US National Monument under the Antiquities Act (I have no idea what that is).

What I do know: its declaration as a national monument was quite controversial, moving a giant swath of land from private to public use, but has since become quite popular offering wilderness camping, fishing and of course birding. 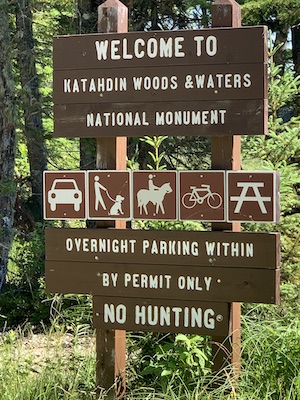 This far north, the dominant conifers (i.e. evergreens) go from the pines and hemlocks of southern Maine . . . to the spruce trees that dominate Canada’s Boreal Woodlands.   And those enormous forests have boreal birds . . . birds we never see closer to home.

Ingrid and I headed north around 3:30 AM for the long drive to Katahdin Woods and Waters.   We had heard that the park roads were a little bit rough.  This is akin to calling a Borat movie . . . a tad off-color.

The eight mile dirt road into the park was filled with potholes, rocks and wooden plank bridges (think Indiana Jones).  This access road was apparently maintained by a logging company that did not want visitors as evident by several big yellow signs saying “PARK NO” (remember the controversial thing???).

Once we passed the gate into Katahdin Woods and Waters the roads improved not at all but now they had posted speed limit signs of 10 mph (like I was driving faster than that).  A dozen times we met an SUV or truck coming the other way . . . which meant both vehicle pulling to the edge of the forest and hoping that they didn’t scrape.

But the birds made it worthwhile. Spruce Grouse, Olive-sided and Yellow-bellied Flycatchers, Northern Goshawk and a Black-backed Woodpecker were among the birds we saw.

As expected, a couple Canada Jays were hanging out near a campground . . . this very tame, charismatic bird is also known as the Gray Jay, Whiskey Jack, Camp Robber, Lumberjack, Meat Bird, Venison Hawk, Moose Bird, Gorby Bird and Gooney Bird.  They posed for photos as they fed on Frito-corn chips that had fallen around the campsite.

Perhaps the highlight of the visit was three Boreal Chickadees (they are brown) that came in on us while we were walking down an old lumber road.  This rather shy bird (unlike its Black-capped or Carolina Chickadee cousins) primary diet consists of spruce cones.

The drive out of Katahdin Woods and Waters was every bit as enjoyable as the drive in . . . we spent the night in Millinocket where we had a lovely lakeside dinner and apparently I fell asleep muttering “never again, never again”.