Back in January I stood with a group of birder in ankle deep snow trying to stay warm as we waited for a rare Black-headed Grosbeak to appear.   A birder who set the Maine Big Year record back in 2011 was providing me helpful hints . . . when he came to the one I had been dreading . . . “don’t forget the woodpeckers!!!!”

He wasn’t talking about the Downy and Hairy Woodpeckers that regularly come to our feeders; or the less common Red-bellied, the shy Flickers and Sapsuckers; nor the magnificent Pileated Woodpecker.

He was talking about the tiny black woodpeckers of Maine’s northern spruce forests. 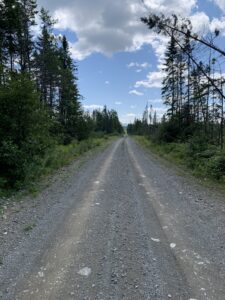 For those readers not too familiar with Maine, most of the state’s population resides along the coast and inland through the lower 3rd of the state.  Beyond there is a vast uninhabitated forest, broken up by occasional rustic camps and lumber towns . . . connected by a network of dirt roads maintained by the logging companies.

Back to the woodpeckers . . . the Black-backed Woodpecker is relatively common . . . if you are willing to travel up into the boreal forest (spruce trees) you’ll seen one.  I’ve seen at least four times this year, on the logging roads around Saddleback Mountain.  A bit of work to find but nothing too difficult.

The real challenge is the American Three-toed Woodpecker.  It looks very much like its cousin the Black-backed, except it has white spots, makes a unique drumming sound and can only be found on one particular logging road in northern Maine . . . the “Umbazookus Road.”

So Tuesday morning at 2:30 am, Ingrid and I headed out on our quest for the American Three-toed.

The first three hours of our journey was on Route 95 . . . the same high speed highway that runs up the east coast of the country . . . the exits and towns become more sparse as you get north of Bangor.

The Golden Road is a 97 mile private road built 40 years ago by the Great Northern Paper Company.  It stretches from Millinocket west to the Canadian Border.  It is wide enough to allow massive logging trucks to pass each other side by side while still having room for huge snow banks along the edges.  Thats the good part . . . the bad part is the pot holes, ruts, washboard surface and dust that makes the road a real adventure. 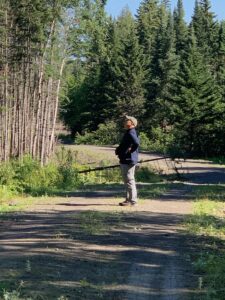 After 18 miles we turned on Telos Road, a smoother logging road made from small pieces of slate . . . a stone that can easily puncture a tire.  Seemingly, every birder that chases the American Tree-toed Woodpecker has a story of a flat tire on these roads . . . one told us he was three for three on trips into the area . . . getting the bird three times and getting a flat three times.

We had better luck, traversing the entire 23 miles on Telos Road and then a few on Umbazookus without any tire problems and we managed to avoid being run over by logging trucks as well.

After about a mile on Umbazookus Road, we parked our car next to a large stand of Black Spruce and almost immediately heard the distinctive drum of our quarry, the American Three-toed Woodpecker and he sang (more of a rattle) just a few minutes later.  Maine Big Year Bird # 295.

The drive out was equally jaw wrenching but uneventful and we saw a number of beautiful birds that reside in the Maine North Woods.

We now had both of “the Woodpeckers” that I have been warned about in January.