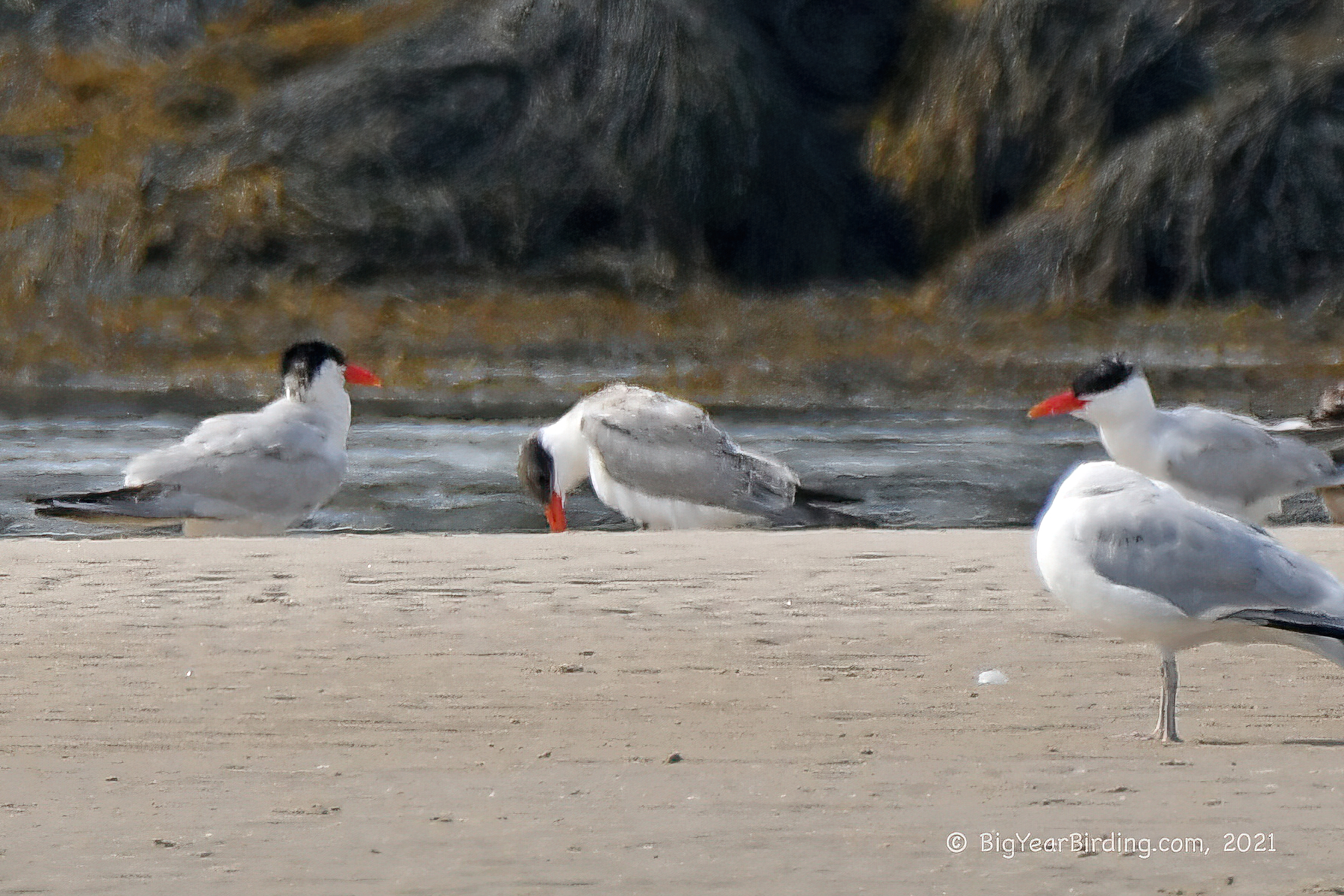 Birders come in all shapes, sizes and ages.  There are old fogies (like myself), the academic ornithological types (“notice the rufous upper-wing coverts”), the matronly fanatics (made famous by Miss Jane Hathaway on the Beverly Hillbillies)

This later group is made up of some amazing “kids”.  Last year the top birder in Maine was Matthew Gilbert who identified 298 species . . . all before he got his drivers license!!!!  Check out the Downeast Magazine story on Matthew.

Then there are two University of New England students: Harry Wales and Xander Vitarelli that seem to always be on a bird before I am . . . I’m not sure when they have a chance to study.

This summer Harry did Caspian Tern research on Lake Champlain.  The Caspian Tern is much bigger than the Terns that typically nest along the Maine coast . . . it has a large, almost comical orange bill.  Back in June of 2015, Ingrid and I were on a boat on Lake Champlain with some friends and a Caspian flew overhead . . . and that was the only Caspian Tern we have ever seen.

Anyway, this summer Harry was telling me about his research and jokingly I told him to bring a couple Caspian Terns with him when he came back to Maine.  He promised to try.

So fast forward to yesterday, I was birding on a beach in Biddeford Pool, looking for shorebirds.  Across a nearby sandbar, comes Harry, Xander and a few of their UNE birding buddies . . . they had just completed their first class of the semester and decided to go birding.

When I was in college and had just completed my first class of the semester . . . I would have been playing beer pong!!!

Anyway, we all had fun catching up when Xander pointed at five birds flying over the water . . . and Harry yelled “those are Caspians”!!!!

How had Harry managed to bring these birds from the New York/Vermont border all the way to the coast of Maine . . . I’m not asking questions . . . just adding them to my Maine Big Year list!!!

Later in the day, another rare bird for Maine . . . a Royal Tern . . . was reported on the same beach.  So Ingrid and I rushed back over.  We didn’t see it, but another rarity, a Forster’s Tern flew a circle around the spot we were standing and headed back out to sea.

Why did three rare birds, all Terns, show up on the same day and on the same beach in Maine?  Perhaps Hurricane Henri pushed them here?

Or perhaps we should remember the lyrics by the Byrds:

Regardless, the Caspian and Forster’s bring the Maine Big Year total to 303.