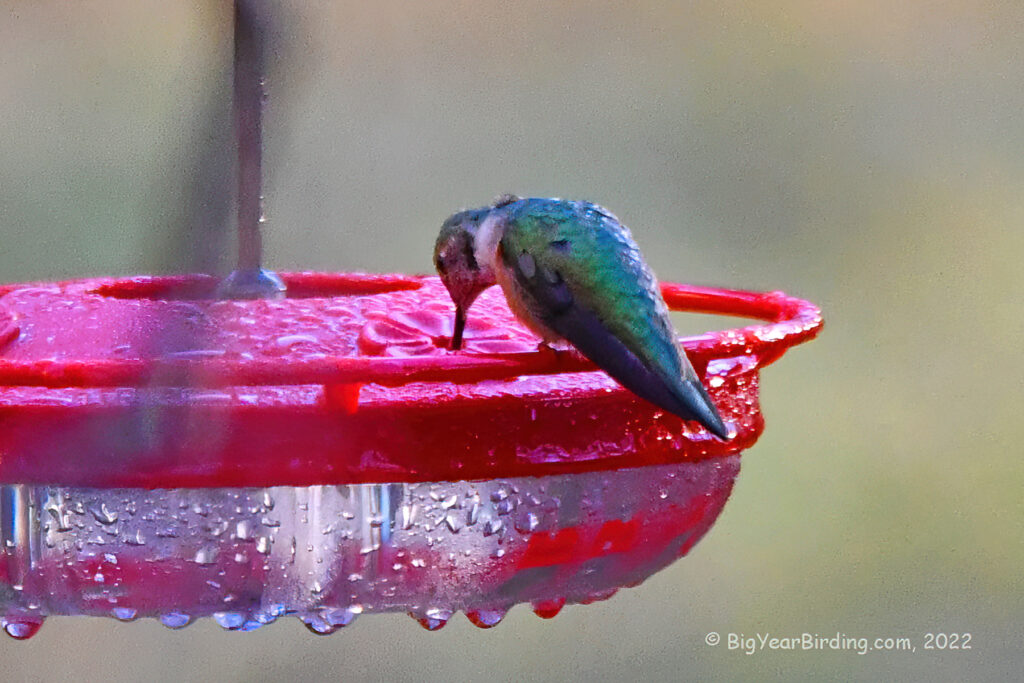 During April School Vacation of 2019, Ingrid and I were in Arizona to see do a little birding and get a preview of warm spring weather.

There we visited the Patton Center for Hummingbirds, a onetime private home, that is now a bird sanctuary known for its visiting hummingbirds.  Located just outside, Patagonia, the Patton Center has been visited by 14 species of hummingbirds . . . many of them Mexican or Central American Species that have stumbled across the border.

There we saw, numerous hummers . . . including several Broad-tailed Hummingbirds . . . a species that summers in the west before heading to Mexico and points south for the winter.

Fast forward, to the fall of 2022.  Ingrid and I had enjoyed our usual summer of Ruby-throated Hummingbirds visiting our six feeders scattered around the yard.  The “Ruby-throat” is the only hummingbird regularly found in the American East as they are capable of migrating in a single flight over the Gulf of Mexico each spring and fall.  All other “USA” hummingbirds migrate through Mexico and Texas and then continue west, as far north as Alaska.  As always, our “Ruby-throats” leave our yard just after Labor Day after arriving in early May.

For the last three years a single Rufous Hummingbird has visited Maine and Ingrid and I have been fortunate to see them.  While the “Rufous” summers in the Pacific Northwest, they winter in the American South . . . so having a bird show up at a Maine feeder makes a little sense . . . we all get lost sometimes.

A week before, Thanksgiving, I began to hear rumors of an unusual hummer at a residential feeder in Freeport (home of LL Bean!!!).  It definitely wasn’t a “Ruby-throat”, they were all long gone and it was generally assumed to be another wayward “Rufous”.  It was a first year bird, having hatched this summer and lacked some of the mature adult field marks that would make identification easy.

While in Texas, visiting our son and daughter-in-law for Thanksgiving, I received a text message.  The bird had been captured, banded, examined, measured and released . . . incredibly it was a Broad-tailed Hummingbird . . . the first recorded sighting in New England . . .  ever!!!!

Understandably, the Freeport owner was a bit apprehensive about 100s of birders flocking to her yard to see the bird . . . so Derek Lovitch, one of the state’s top birders and owner of Freeport Bird Supply, arranged a visitation schedule by invitation only.

We were still in Texas when our invitation came through and a massive rain and high wind storm hit just after we got back to Maine.

Birders were asked not to arrive before 8:00 am, so the morning after the storm I was at the house at 8:01, worried that the bird had not made it through the night.  I heard it vocalizing high in a pine tree as soon as I got out of the car . . . and he was at the feeder 10 minutes later.

Ingrid saw him a week later and incredibly he is still visiting the feeder several times a day (as of this writing on December, 19) . . . despite snow and freezing weather.  Its a thrill, but I kind of wish he’d leave for Mexico.

If you wonder how “experts” capture, band, measured and release a hummingbird, check out this video made earlier this fall for when the Rufous Hummingbird was in Dayton, Maine.